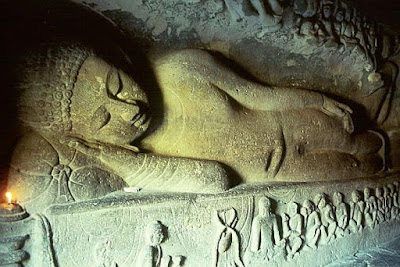 Buddha’s entire life effort was to get humanity rid of suffering. And to achieve it, non attachment was the way he showed. Not a relatively new concept, as old as Vedas and creation of trees. Krishna sings it through Bhagwad Gita, ‘Karmanye vyadhikarasthe, ma faleshu kadachana!!!!!” do your karma and be non attached to it’s fruit.
I like the word non attachment, most of us misinterpret it to detachment. Both are no way close to same. To detach is to be attached to the process of detachment thus an effort to detach from suffering is a form of suffering itself.

Abode of Dharma, the goodness, the virtue. A resting place. The name says it all. That’s Dharamshala.
It does feel restful here, in mind and spirit. The valleys of Dharamshala slows you down and makes you notice life. More popular for being home to current Dalai Lama, the little town grew with flow of Buddhists coming from Tibet.

It was 6am when we reached. The little town was waking up. Streets were adorned with colorful paper decorations. Soon we learned it was the Dalai Lama’s birthday tomorrow. Visitors had already occupied most of the town, homes had turned into hotels filled mostly with foreigners.

Gopala smart as he was quickly made friends with some local monks and secured a place for us to stay. 3 km away from the town, a place called Bhagsu, in the center of a mountain which required you to walk all the way down a hill, cross a small stream of water and then climb again to reach there, was a very small but extremely beautiful monastery. Not very far from this place was a Kali temple. Little amused I was but not very surprised with Gopala’s decision, of why he chose a monastery over a temple to abode. A transformation was in the process.

The four monks were very very kind to allow us in their little life bubble. With our matted hair and long beard, saffron clothes and bare feet, no doubt we were genuinely monastic and thus at some deeper level we could connect. They spoke very little but opened their hearts. The meditation room was the largest, compared with one other room they had to sleep. With windows on two sides, it was completely empty with absolutely no furniture. Buddha in his parnirvana stage was in a stone statue at the end of the room, very rare do you see this, as it depicts him lying on a bed with his one hand supporting his head, reflecting moment before he died, symbolizing he too was a mortal.

I felt the impulse to sit and as I did, without any chanting, without any mantras without any prayers, I just closed my eyes and slowly as if caressing my soul, peace engulfed me.

Advait part 22 (Back to River)