All is one and one is all 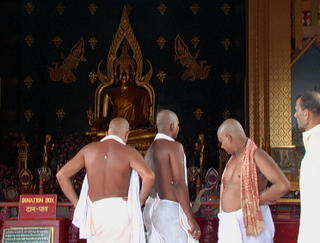 10.08.05. Mahabodhi temple. Bodhgaya.
Karma yoga or Bhakti yoga, which path is greater? I used to always ask this to my self. I always had this bad habit of comparing, which should not be done as we all know “All is one and one is All”. But then mind is like a child it never stops asking questions. The difference between the two (although there is none) was illustrated beautifully in a story I came across in Internet. Have you noticed a female monkey and a lioness and the way they hold their babies while walking? Baby monkey clings to her motherÕs chest and he would fall if he leaves it thus requiring equal participation from him. On the other hand, a lioness holds her baby from the neck requiring the baby to surrender completely to his mother and offer no resistance knowing he is safe.
Karma yoga is similar to the state of baby monkey where a person performs his duty to survive in this world, earn his livelihood through physical work and supports his family and Bhakti yoga is the path of renunciation like the state of baby lion where one surrenders his life to God. “Mother” representing God in both cases.
What I realize was that none of them is greater, there is a difference between the both and yet there is none. Both participate, one by “holding” to the God and another by “surrendering” to it. They are different paths, different states of mind and difference of opinions and yet they both are closer to God. “Mother” knows no difference.
So we choose, which path do we want to go on with an understanding that choice should be based not on rejection of other path but by acceptance of it because both lead to the God and thus realizing “All is one and one is All”.
In his presence.