Meeting of Rumi and Shams

By areyourealJune 9, 2019No Comments
First meeting of Rumi and Shams –
from the book ‘Forty Rules of Love- Elif Shafak’ 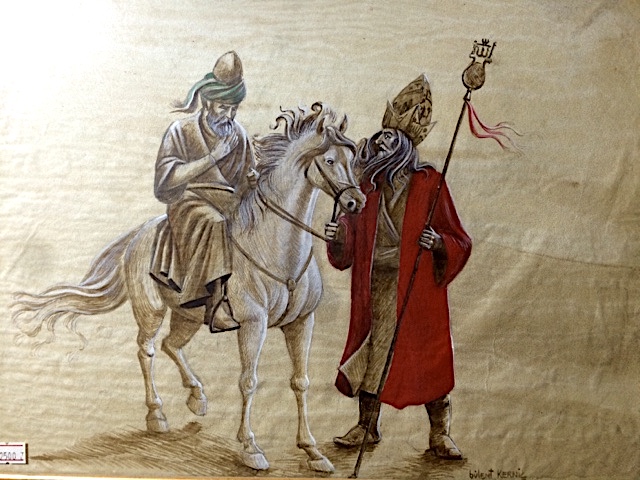 Blessed is this day, for I have met Shams of Tabriz. On this last day of October, the air has a new chill and the winds blow stronger, announcing the departure of autumn.

This afternoon the mosque was packed, as usual. While preaching to large crowds, I always take care to neither forget nor remember my audience. And there is only one way of doing this: to imagine the crowd as one single person. Hundreds of people listen to me every week, but I always talk to one person alone — the one who hears my words echo in his heart and who knows me like no other.

When I walked out of the mosque afterward, I found my horse readied for me. The animal’s mane had been braided with strands of gold and tiny silver bells. I enjoyed listening to the tinkling of the bells at every step, but with so many people blocking the way it was impossible to proceed very fast. In a measured pace, we passed by shabby stores and houses with thatched roofs. The calls of the petitioners mingled with the cries of children and the shouts of beggars eager to earn a few coins. Most of these people wanted me to pray for them; some simply wished to walk close to me. But there were others who had come with bigger expectations, asking me to heal them of a terminal illness or an evil spell. These were the ones who worried me. How could they not see that, neither a prophet nor a sage, I was incapable of performing miracles?

As we turned a corner and approached the Inn of Sugar Vendors, I noticed a wandering dervish push his way through the crowd, strutting directly toward me and regarding me with piercing eyes. His movements were deft and focused, and he exuded an aura of self-sufficient competence. He had no hair.  No beard. No eyebrows. And though his face was as open as a man’s face could ever be, his expression was inscrutable. But it wasn’t his appearance that intrigued me. Over the years I had seen wandering dervishes of all sorts pass through Konya in their quest for God. With striking tattoos, multiple earrings and nose rings, most of these people enjoyed having “unruly” written all over them. They either wore their hair very long or shaved it off completely. Some Qalandaris even had their tongues and nipples pierced. So when I saw the dervish for the first time, it wasn’t his outer shell that startled me. It was, I dare to say, his gaze. His black eyes blazing at me sharper than daggers, he stood in the middle of the street and raised his arms high and wide, as if he wanted to halt not only the procession but also the flow of time.

I felt a jolt run through my body, like a sudden intuition. My horse got nervous and started to snort loudly, jerking its head up and down. I tried to calm it, but it got so skittish that I, too, felt nervous. Before my eyes the dervish approached my horse, which was shying and dancing about, and whispered something inaudible to it. The animal started to breathe heavily, but when the dervish waved his hand in a final gesture, it instantly quieted down. A wave of excitement rippled through the crowd, and I heard someone mutter, “That’s black magic!”   Oblivious to his surroundings, the dervish eyed me curiously.

“O great scholar of East and West, I have heard so much about you. I came here today to ask you a question, if I may?”

“Go ahead,” I said under my breath.

“Well, you need to get down from your horse first and be on the same level with me.”

I was so stunned to hear this that I couldn’t speak for a moment. The people around me seemed equally taken aback. No one had ever dared to address me like this before.   I felt my face burn and my stomach turn with irritation, but I managed to control my ego and dismounted my horse. The dervish had already turned his back and was walking away.

“Hey, wait, please!” I yelled as I caught up with him “I want to hear your question.”

He stopped and turned around, smiling at me for the first time.

“All right, do tell me, please, which of the two is greater, do you think: the Prophet Muhammad or the Sufi Bistami?”

“What kind of a question is that?” I said. “How can you compare our venerated Prophet, may peace be upon him, the last in the line of prophets, with an infamous mystic?”

A curious crowd had gathered around us, but the dervish didn’t seem to mind the audience.

Still studying my face carefully, he insisted, “Please think about it. Didn’t the Prophet say, ‘Forgive me, God, I couldn’t know Thee as I should have,’ while Bistami pronounced, ‘Glory be to me, I carry God inside my cloak’? If one man feels so small in relation to God while another man claims to carry God inside, which of the two is greater?”

My heart pulsed in my throat. The question didn’t seem so absurd anymore. In fact, it felt as if a veil had been lifted and what awaited me underneath was an intriguing puzzle. A furtive smile, like a passing breeze, crossed the lips of the dervish. Now I knew he was not some crazy lunatic. He was a man with a question — a question I hadn’t thought about before.

“I see what you are trying to say,” I began, not wanting him to hear so much as a quaver in my voice.  “I’ll compare the two statements and tell you why, even though Bistami’s statement sounds higher, it is in fact the other way round.”

“I am all ears,” the dervish said.

“You see, God’s love is an endless ocean, and human beings strive to get as much water as they can out of it. But at the end of the day, how much water we each get depends on the size of our cups. Some people have barrels, some buckets, while some others have only got bowls.”

As I spoke, I watched the dervish’s expression change from subtle scorn to open acknowledgment and from there into the soft smile of someone recognizing his own thoughts in the words of another.
“Bistami’s container was relatively small, and his thirst was quenched after a mouthful. He was happy in the stage he was at. It was wonderful that he recognized the divine in himself, but even then there still remains a distinction between God and Self. Unity is not achieved. As for the Prophet, he was the Elect of God and had a much bigger cup to fill.

This is why God asked him in the Qur’an, Have we not opened up your heart? His heart thus widened, his cup immense, it was thirst upon thirst for him No wonder he said, ‘We do not know You as we should,’ although he certainly knew Him as no other did.”   Breaking into a good-natured grin, the dervish nodded and thanked me. He then placed his hand on his heart in a gesture of gratitude and stayed like that for a few seconds.

When our eyes met again, I noticed that a trace of gentleness had crept into his gaze. I stared past the dervish into the pearl gray landscape that was typical of our town at this time of the year. A few dry leaves skittered around our feet. The dervish looked at me with renewed interest, and in the dying light of the setting sun, for a split second, I could swear that I saw an amber aura around him.
He bowed to me respectfully. And I bowed to him I don’t know how long we stood like that, the sky hanging violet above our heads. After a while the crowd around us began to stir nervously, having watched our exchange with an astonishment that verged on disapproval. They had never seen me bow to anyone before, and the fact that I had done so for a simple wandering Sufi had come as a shock to some people, including my closest disciples.

The dervish must have sensed the censure in the air.  “I’d better go now and leave you to your admirers,” he said, his voice dwindling to a velvety timbre, almost a whisper.

I glimpsed a trace of thoughtfulness in his face, a wistful pucker of the lips, as if he wanted to say more but simply couldn’t or wouldn’t.

And in that moment, in that pause, I heard the question he hadn’t asked me. “And how about you, great preacher? Tell me, how big is your cup?”

Then there was nothing else to say. We ran out of words. I took a step toward the dervish, getting so close I could see the flecks of gold in his black eyes. Suddenly I was overcome with a strange feeling, as if I had lived this moment before. Not once, but more than a dozen times. I started to remember bits and pieces. A tall, slender man with a veil on his face, his fingers aflame. And then I knew. The dervish who stood across from me was no other than the man I had been seeing in my dreams.
I knew that I had found my companion. But instead of feeling ecstatic with joy, as I always thought I would be, I was seized by cold dread.

Journal Notes:
With beloved Rumi and Shams – My trip to Konya