The Lion and the Dog by Lev Tolstoi (Short Story) 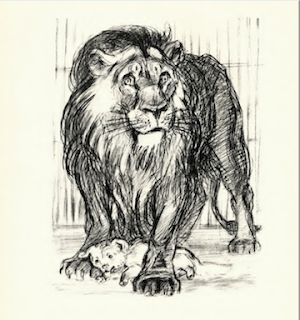 Once a dog happened to get into a lion’s cage in the Zoo.
The dog tucked its tail between its legs and crouched in a corner of the cage. The lion went up to it and sniffed at it.
The dog rolled over on its back and wagged its tail.
The lion nudged it with its paw and rolled it over.
The dog jumped up and then stood on its hind legs.
The lion looked at the dog, cocked its head this way and that, and did not touch it.
When the keeper tossed the lion a chunk of meat, the lion tore off a piece and left it for the dog.
That evening, when the lion lay down to sleep, the dog lay down beside it and rested its head on the lion’s paw.
From that day on the dog lived in the lion’s cage. The lion acted friendly towards it. It slept beside the dog and sometimes played with it.
Thus the lion and the dog shared a cage for a whole year.
At the end of the year the dog took sick and died. The lion refused to eat. It sniffed at the dog, licked it and nudged it with its paw.
When the lion realised that the dog was dead it reared up, bristled, lashed its tail against its sides, rushed at the walls of the cage and gnawed at the lock and at the floorboards.
All that day the lion thrashed about in the cage and roared.
Then it lay down beside the dead dog and became still. The keeper wanted to take the dead dog away, but the lion would not let him near it.
The keeper thought the lion would forget its loss if it were given another dog, and so another dog was let into the cage. But the lion rushed at it and killed it instantly. Then it lay down beside the dead dog, put its paws around it and remained thus for five days.
On the sixth day the lion died.
Source: Lev Tolstoi
Journal notes:
Deepa Iyer here beautiful shares on her experience of reading these stories as a child.
“The Lion and The Dog was a story that stayed with me the longest, for it spoke to me of eternal love, friendship and loyalty. Now when I re-read these stories, I marvel at the craftsmanship of a writer who could convey so much with such brevity. That too without intending to sound moralistic or preachy. Children are far too wise for such a trap, and a good author knows this.”